Warning: A non-numeric value encountered in /home/waterway/public_html/wp-content/themes/Divi/functions.php on line 5806 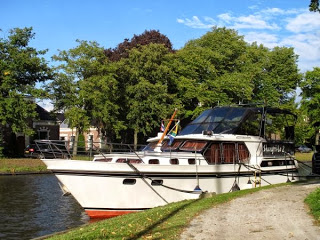 To see Part 3 click here or to go to the beginning of the trip click here
The trip from Dokkum to Leeuwarden was relatively short – 22 kilometres with only 6 bridges and no locks.

We got going about 10.00, and were tied up in Leeuwarden by 13.30. The route was along the Dokkumer Le, (strange name, I know) and through the tiny village of Burdaard.

Transiting bridges and locks in the Netherlands is generally free, but in Friesland quite a few bridges are toll bridges and you have to pay

“bruggeld”. I had read up on all this in the Wateralmanak, and the charges are well advertised at the bridges themselves.

The fun and interesting bit is actually paying the toll – the bridge keeper has a long pole like a fishing rod, with a brightly coloured wooden clog on the end of the line.

As you go through, he swings the clog out to one of your crew on the foredeck, and they drop the coins into the clog.

There were three such toll bridges along the way. Altenabrug leaving Dokkum, Van Steenhuizenbrug in Burdaard and Eebrug entering Leeuwarden.

Total cost of the tolls was Euro 15.

Burdaard was a tiny, picturesque village with houses and cafes lining the canal, 2 lift bridges and a windmill.

Netherlands is famous for its windmills. Nowdays there are just hundreds of wind turbines all over the country, but most towns or villages have

retained one of the old traditional windmills.

These have been restored and in some cases actually grind flour. They are generally operated by volunteers.

Leeuwarden is another very popular boating town, and like Dokkum the city centre is on an island surrounded by canals.

Again it was a good thing we arrived relatively early. We found a mooring spot quite easily, but most berths were taken a couple of hours later.

At most of these town moorings, water, electricity and services are paid for at the harbour master’s office, or at coin machines.

Leeuwarden was the first place we encountered the card system. Fortunately I found the harbour master who explained and showed us how it all worked, otherwise it would have been a disaster.

Everything was done at an automatic dispenser, which only took credit cards, not cash!

We bought the required card, topped it up via credit card and now had access to shore power, toilets and showers, and the washing machines and tumble drier.

Access to washing machines and driers is the one thing that is not often available on the waterways, so we made good use of them to catch up with all the laundry.

Leeuwarden is known for it’s own leaning tower – Oldehove. It really does lean, more than the one in Pisa, as can be seen from the picture.

Read more about it – here.

I joined the many other tourists who climbed to the top to take in the view over the town.

Surprise surprise! – There was a market and festival on – the Uitmarkt.
Well, they were setting up on Friday and Saturday. The market only started late Sunday morning, and was over by 17.00.

A lot of work for very little. But it was interesting enough wandering around the various stalls.

I couldn’t help being amused at the gentleman dressed up like a Beefeater, with an extremely tall busby, and playing the bagpipes!

The Dutch use boats for all sorts of things.

There was a “Theatre Boat” moored up for the festival.

A large traditional barge, with the foredeck converted to a stage with a whole lot of chairs for an audience.

A lady dressed up in traditional costume was holding forth in great style. I couldn’t really understand what she was saying
unfortunately.

On Saturday evening we went up to the town for a beer and a meal at an Indian restaurant.

Next – another wild mooring and on to Sneek.

My love of boats goes back to my early years when I went on holiday with my parents to Knysna in the Cape. We stayed at a hotel on stilts, and I played in rowing boats and little motor boats on the lagoon. 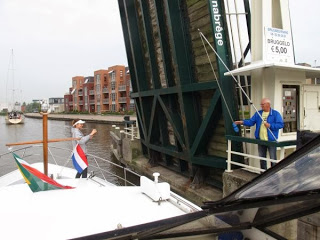 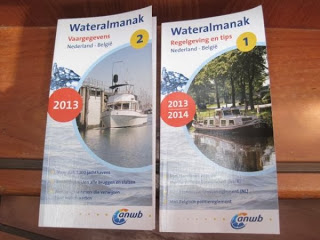 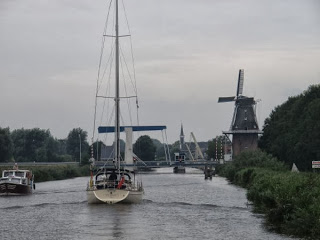 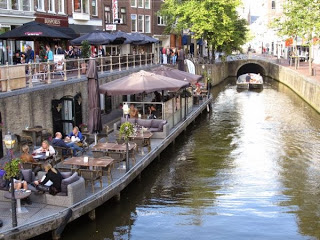 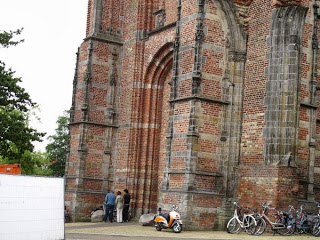 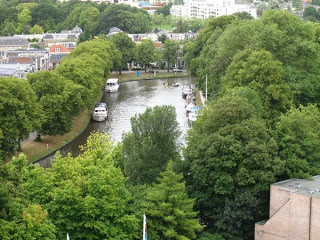 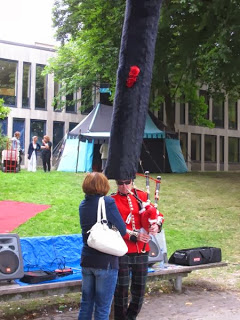 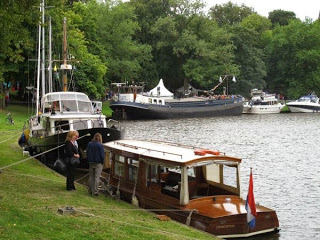